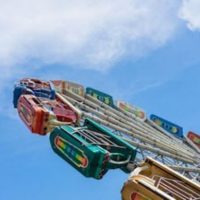 People go to amusement parks to have fun, but sometimes they get into serious accidents. Many things can happen at a park and unfortunately, one of them is falling off a ride. Sadly, these types of accidents are usually fatal.

This was recently the case at a Florida amusement park. A 14-year-old boy was killed after falling from the FreeFall ride at ICON Park in Orlando on March 24. The FreeFall is a ride that takes people up and then quickly drops them nearly 400 feet down, at speeds exceeding 75 miles per hour.

The teen was on the ride when he came out of the seat while the ride was slowing down during the drop. When the ride stopped, the boy’s harness was still in a down and locked position. The Missouri boy was taken to a local hospital, where he later died.

Everything seemed to be in place, and the teen was secured in the ride before it started, so law enforcement officials are trying to determine what caused the boy to fall. Three witnesses—all employees—saw the boy fall from the ride as it descended. There are questions as to whether the teen was too large for the ride. A football player, the boy was 6 feet 5 inches and 340 pounds. According to the ride’s operations manual, the maximum passenger weight is approximately 287 pounds. Operators should be checking to see that riders fit within the contours of the seat and that the bracket fits properly. It is unknown if the crew was following these guidelines when placing the teen in a seat and checking before operating the ride.

The 430-foot-tall FreeFall is fairly new, as it just opened around Christmas. The ride passed a safety inspection on December 20, before it was allowed to open. No deficiencies were listed in the report. The ride was scheduled to be inspected again in June. In any case, the owner/operator of the ride is responsible for inspecting the FreeFall each day prior to operation.

This was the first issue to occur with the FreeFall ride. The ride has been closed until further notice. An investigation is underway and the amusement park is cooperating with the sheriff’s office. A forensic engineering firm, will  construct a reenactment of the scene to determine what happened. The boy’s parents are in the process of filing a wrongful death lawsuit.

Filing a claim against an amusement park can be a complicated matter. See how a Tampa amusement park accident attorney from Moore Law can help you fight against these big corporations and their insurance companies. Schedule a free consultation today by filling out the online form or calling our office at 813-510-5400.