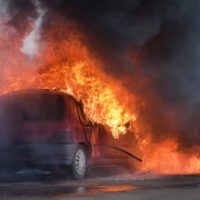 Most car accidents don’t involve vehicles flying high through the air, but this is what recently happened in Florida. An SUV was T-boned by another SUV, causing it to fly as high as 30 feet up into the air and land on a nearby house.

The crazy crash happened on the afternoon of July 24 in the 1100 block of NW 7 Avenue in Fort Lauderdale. A Lamborghini Urus ran a stop sign and was T-boned by a Nissan SUV. The impact caused the Lamborghini to soar through the air, landing 20-30 feet up on the roof of a home. The SUV hit a tree and slid off the house. It then burst into flames.

A witness helped rescue the Lamborghini driver, who was trapped inside the vehicle. The Good Samaritan dragged the driver out of the SUV and laid him on the ground. The driver, an unidentified man, seemed to be seriously injured at first, but he later snapped out of it.

The driver, who was not wearing any shoes, suddenly became conscious and ran off from the accident scene. He later sought medical attention at a local hospital. He is cooperating with the police.

Firefighters were able to quickly extinguish the fire. The driver of the Nissan SUV suffered minor injuries. Nobody inside the home was injured.

A Lamborghini Urus is a luxury vehicle that can cost as much as $200,000. The man had rented the vehicle from a luxury car dealer in Miami.

There is not much difference between crashing your own vehicle and crashing a rental car. A driver who crashes a rental car is almost always on the hook for damages. That’s because as the renter, you are responsible for any damage or loss to the rental vehicle. When you rent a vehicle, you are contractually obligated to return the vehicle in the same condition it was in when you rented it. This is true whether or not the damage was caused by someone else’s negligence.

A crash at high speeds can cause many things to happen. In this case, the impact caused a vehicle to land on the roof of a house, which is crazy to think about.

Injured in a crash? A Tampa car accident attorney from Moore Law can help. We understand the damages involved and will help you get the compensation you deserve. Schedule a free consultation today by calling 813-510-5400 or filling out the online form.