Woman Falls To Her Death In Freak Drawbridge Accident 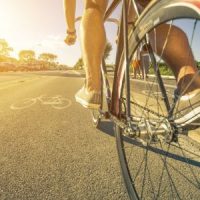 Bicyclists need to be aware of their surroundings when riding. They especially need to be cautious when on or around bridges, especially  drawbridges, which can go up with little notice.

Sadly, a freak accident in Florida has led to fatality for a bicyclist. The accident occurred on the afternoon of February 6 on the Royal Park Bridge as the woman was crossing from Palm Beach into downtown West Palm Beach with her bicycle.

The woman was within 10 feet of the drawbridge’s barrier arms when it began rising. The woman tried to hang on and a man on the other side grabbed onto the woman’s arms, but could not hold onto her for too long.

The man lost his grip and the drawbridge opened. The woman fell about six stories below. She landed on the concrete below the bridge. She died on impact.

The bridge tender was upset over the woman’s death. She and others in vehicles witnessed the woman’s fall. The drawbridge is maintained by the state’s Department of Transportation, but a private state contractor employs the bridge’s tenders, according to the Palm Beach Post.

The Royal Park Bridge is trafficked heavily by bicyclists.

The victim was an older woman who was not carrying an identification and could not be immediately identified. She was later identified as 79-year-old Carol Wright.

The drawbridge has clearly visible barriers and uses bells to alert those nearby that it’s about to open. There are crossing arms and warning signs. There are also various safety procedures that bridge tenders must follow, including multiple steps and lots of double-checking to make sure no pedestrians, bicyclists, or vehicles are on the bridge when it’s about to go up. It’s unknown at what point the woman tried to cross the bridge.

Royal Park Bridge, which is the main bridge commonly used by bicyclists, was shut down for several hours before reopening that evening. The circumstances around the accident are still under investigation by detectives. Investigators will review the surveillance video to determine what exactly happened.

It is unknown why the bridge tender made the bridge go up before it was cleared of pedestrians.

The bridge company, Florida Drawbridge, could be held liable for the woman’s death. The company declined to comment.

Bicycle accidents can happen anywhere. Even crossing a drawbridge can be unsafe if the bicycle rider does not cross in time.

Have you been in a bicycle accident? A Tampa bicycle accident attorney from Moore Law can help you get compensation for your injuries and other damages. Schedule a free consultation with our office today by calling 813-510-5400 or filling out the online form.